Featuring a gathering of more than fifty of contemporary literature’s finest voices, this volume will enchant, move, and inspire readers with its tales of The Writing Life. In it, authors divulge professional secrets: how they first discovered they were writers, how they work, how they deal with the myriad frustrations and delights a writer’s life affords. Culled from ten years of the distinguished Washington Post column of the same name, The Writing Life highlights an eclectic group of luminaries who have wildly variet stories to tell, but who share this singularly beguiling career. Here are their pleasures as well as their peeves: revelations of their deepest fears; dramas of triumphs and failures; insights into the demands and rewards.

Each piece is accompanied by a brief and vivid biography of the writer by Washington Post Book World editor, Marie Arana, who also provides an introduction to the collection. The result is a rare view from the inside: a close examination of writers’ concerns about the creative process and the place of literature in America. For anyone interested in the making of fiction and nonfiction, here is a fascinating vantage on the writer’s world—an indispensable guide to the craft.

An Excerpt from the Introduction of The Writing Life, by Marie Arana

“A poem,” Robert Frost once wrote in a letter to a friend, “begins as a lump in the throat . . . a homesickness.” So it was for this series, “The Writing Life, which began for me—quite simply—as a bout of nostalgia. It was 1993, a few months after I had joined The Washington Post’s Book World, and despite being in the company of 2 of the best critics in the country—Michael Dirda and Jonathan Yardley—I genuinely missed working as I had before with authors, “real” writers, individuals who for one reason or another choose to work in solitude, struggling against oblivion, spilling their hearts and minds onto endlessly blank pages, often for meager recognition and pay.

Before joining The Post, I had spent 15 years as a book editor for Harcourt Brace Jovanovich and Simon & Schuster, and the crossover from creative to critical, from publishing to reviewing, was—in its own small way—nothing short of defection. An editor in a publishing house toils behind closed doors in intimate contact with no one so much as the author she is publishing; because the process from acquisition to finished volume can take as long as 5 years or more, her gross annual product is scant—10 to 15 books, perhaps. An editor at a major newspaper’s book review, on the other had, works with legions of reviewers, surveys a broad rush of forthcoming books, publishes almost every day, and accomplished all amid the busy collegiality of a newsroom. There is a natural opposition here: The editor who makes books feels the critic is her natural enemy, that the critic is very possibly a cretin, doesn’t read books properly, and only rarely understands them. The book review editor feels that people who work for publishers are gluttons, far more interested in profits than excellence—that there are far too many books published, and that not many of them are very good.

My notion was to find some way to continue to function in both worlds—an impossible hope, really, given the remove at which an honest book critic must labor. But that hope, nevertheless, ended up bearing the fruit of an idea: Why not invite seasoned writers to mull about their craft, address the singular ways they approach the challenges of writing and thereby give Book World readers some insights into the creative process? Why not accompany those essays with short profiles, sidebars that characterized the writers’ personalities and briefly listed their works? The utterly selfish motive on my part was to keep a foot on the other side of the fence, to remind myself as often as possible that the writing of books is an excruciatingly difficult enterprise. It is not easy to focus one’s intelligence and go about the business of stringing words together, one by one, thousands at a time, until a full-fledged, well-executed books emerges. I asked my colleagues in Book World whether such a series about the writing of books would interest them. Their immediate willingness to let me give it a try resulted in the launching of The Writing Life, the first ongoing series of its kind in any major American newspaper.

At the heart of this exercise were some important convictions about how good writing—no matter what its category—gets learned and done. What you are about to discover, in this impressive cavalcade of confessionals, is that everyone does it a different way. There is no one way to approach the writing of a book, unless, of course, you are producing pulp—cookie-cutter versions of the same thing. If you strive to become a real writer, an original, you need to be told clearly: There is no magic formula. Someone can teach you to formulate a good sentence; someone can teach you to do the legwork, build evidence, fashion persuasive arguments, connect the dots. But if readers carry away one lesson from this book it should be that writers learn their craft, above all, from the work of other writers. From reading. They learn it from immersing themselves in books. They do not learn it from classrooms, or workshops, or manuals—they cannot be programmed to perform. It is, in essence, lonely work; isolation is what they must learn to savor. Perhaps they will have been encouraged along the way by a single, pivotal person; perhaps they will have learned perseverance after much rejection; perhaps they will get the recognition of readers and peers. Come what may, they must go to their desks alone.

For all the experience I had had with writers, first at publishing houses and then at Book World, I could not appreciate the full contours of a writing life until I had gone into my study, closed the door, sat down and tried to write a book myself. Editing books and judging them do not necessarily qualify one for the task. If anything, the critical professions emphatically do not prepare you to write a book of your own. I found that out a few years ago when I decided to give it a try. Initially I was unable to take off my editorial had and surrender myself to the creative business of writing. I was hesitant, intensely critical, clogged up by the analytical. How can that be? You say. How can an editor who guides writers and helps them shape ideas—not to mention a book review editor whose job is to decide how they’ve done it—how can that person not be capable of putting together a book? The answer reveals something about the process: You cannot write books with a critical head. You cannot produce good prose if you are a skeptic, scouring every line for the false note, the exaggeration, the argument that doesn’t persuade.

It was during this preparatory period that the essays in this series assumed particular importance to me. I recalled the similar insecurities of so many writers represented here and the strategies that enabled them to write. There was Wendy Wasserstein’s counsel: Go to a far, secluded place; live in pajamas. Edmund Morris’s advice: Find a good pen, get physical with words. Cynthia Ozick’s warning: Reading and writing are like “getting born or dying, you are obliged to do it alone.” So there I sat—in a room, as far away as I could get—in my pajamas, with a pen in hand. The editor’s hat was gone, the critic’s sneer in a drawer; I was ready to be the fool. . . . 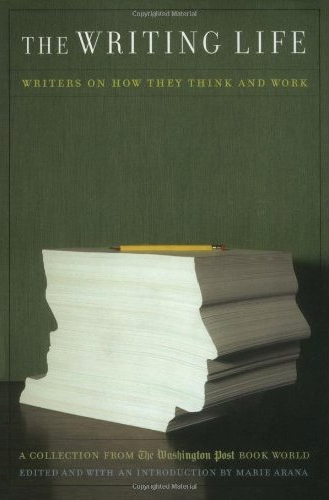