“Thrilling, authoritative and revelatory, here at last is a biography of Bolivar, the maker of South America, that catches the sheer extraordinary unique adventure and titanic scale of his life with accessible narrative and scholarly judgement.” (Simon Sebag Montefiore, author of Jerusalem: The Biography, Catherine the Great and Potemkin, and Young Stalin.)

Superbly balanced . . . I suspect that one reason why her biography is so plausible and engagingly told is that the Peruvian-born Arana is herself a writer of fiction. Like García Márquez (who memorably fictionalised Bolívar in The General in his Labyrinth), she has an instinct for the vitalising detail – the bleached bull’s skull that Bolívar used as a chair; the pots and pans of Indian women known as rabonas clanging as they hurried after Bolívar’s army over that inhospitable terrain. As well, his sad and contradictory story demands a novelist’s empathy. Read more. 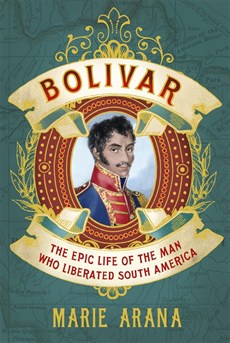